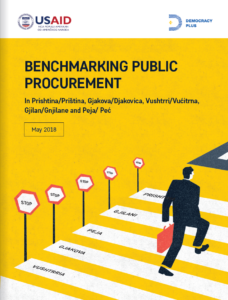 Following the ‘’Baseline Report’’1 prepared by Democracy Plus (D+) in December 2017 for five targeted municipalities of Kosovo, D+ has since then been designing a set of benchmarking indicators, cooperating with municipal procurement officials and preparing the first cycle of the ‘’Benchmarking Report’’ to better assess the performance of Prishtina/ Priština, Gjakova/Djakovica, Vushtrri/Vućitrna, Gjilan/Gnjilane and Peja/ Peć in public procurement. The report covers the period from January 2017 – February 2018, focusing and highlighting best practices, irregularities, violations and the main developments in public procurement
at the local level. The aim is to assess to which extent the municipalities are operating according to the law, as well as to encourage officials to share good practices of public procurement.
Indicators and research methods were set according to our
methodology regarding the monitoring process of public procurement. In order to identify irregularities and municipalities’ best practices in the most accurate of ways, D+ prepared a questionnaire for procurement officials to assess performance in public procurement (see Annex 1). The aim of the ”Benchmarking Report” is twofold. It first of all shows comparable data on municipal public procurement practices and performances across five municipalities, and also provides insightful information not only for the public, but in particular for private companies and procurement regulatory bodies such as the National Audit Office (NAO), Public Procurement Regulatory Commission (PPRC), Procurement Review Body (PRB) and the Anti-Corruption Agency (ACA). The findings in this report were collected through the qualitative and quantitative questionnaire, individual interviews and general discussions related to public procurement system in Kosovo, secondary sources from the independent public procurement institutions and private companies.
The municipalities were compared and analyzed based on the following indicators, for which the reasoning/importance is further explained in the report:
1 Implementation of law
2 Good Practices
3 Implementation of the
recommendations from oversight
institutions
4 Transparency
5 Competition
6 Civic engagement